Valldemossa – what a beautiful city. Nestled into the mountains it only comes into view after winding along the road away from the coast. Nothing could be more different to the bustle of Palma as here one finds tranquility and if standing in the right spot can hear the wind moving through the mountains. It is ancient and oh-so-beautiful with echoes of the past completely fabricating this fairytale village.

The stones have been worn down so much by epochs of people that they now look like something out of a dream – shiny and almost intentionally carved to form the walkway of some luxe palace. But here they are for everyone to see, everyone to enjoy… everyone to slip on. Yes, beware! They are deadly and many blissed out tourists take an unexpected slide to or from their destination, (simply depending on whether or not it was uphill from where they left off).

It is one of many legendary art’s stories that Chopin spent a few months of his life in this city with writer Aurore Dupin – a time which inspired the writing of her novel ‘Winter in Mallorca’. It was in Valledemossa that Chopin composed his preludes which are simply outstanding and pure poetry for the piano.

Actually seeing the piano that he worked on at the time – sitting peacefully in an ancient monk’s cell that must have rung loud with the echos and music of such an wonderful composer – this was truly special. To walk alongside the past in such a way as pure observation, appreciation and finally release is such a strong metaphor that I have since held onto wherever possible. Oh, and the gardens here… again from some lost corner of dream. You can see the ocean and right down through the mountains from here, which is made even more special after getting to know how isolated it is on the way up.

This village is a little corner of paradise and it even snows there in winter (so I have been told). My time in this small village was outstanding and I would highly recommend it to anyone craving a nature and culture clash of overwhelming beauty. 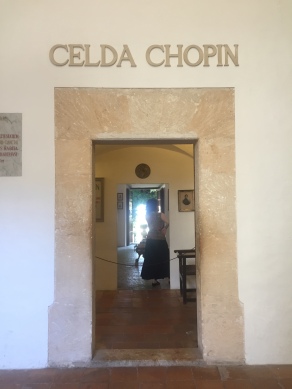